Under Salian rule, „Kästenburg“ (Chestnut Castle) is built to protect the surrounding property. The Castle, like the mountain it is situated on (Chestnut Mountain), is named after the many chestnut trees around the castle (called “Keschde” in the Palatinate German dialect).

The castle is gifted to the Bishopric of Speyer by Johannes I, Bishop of Speyer. 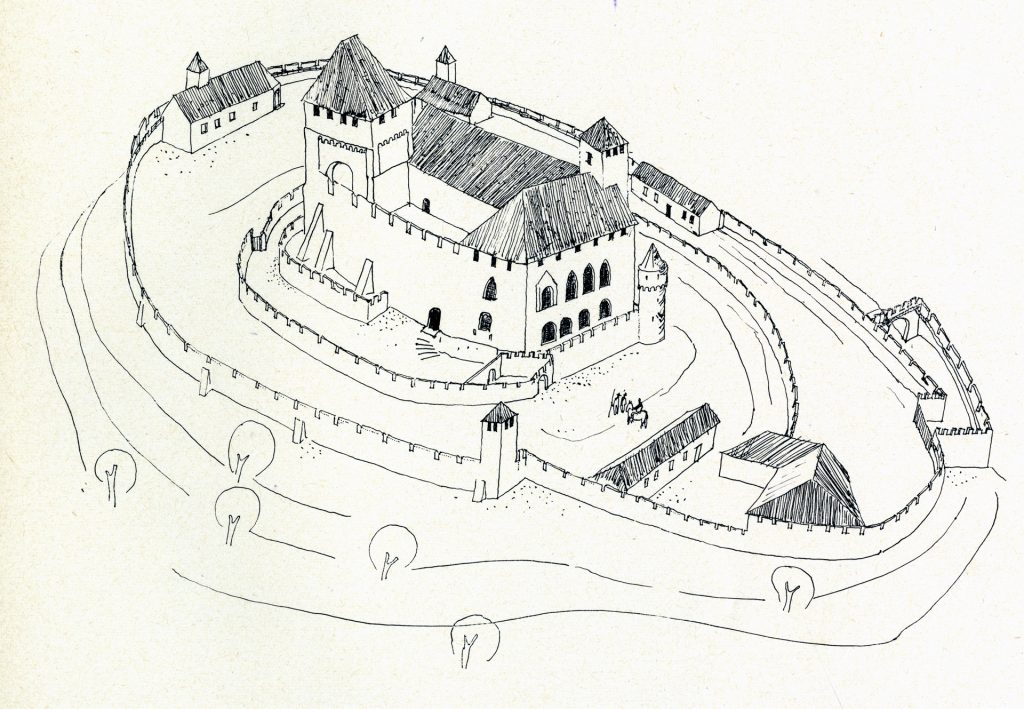 During the Palatinate Peasants’ War, the castle is ransacked and looted by rebellious farmers who are referred to as bunch of peasants from Nußdorf.

In the Second Margrave War, Margrave Albrecht Alcibiades von Brandenburg-Kulmbach demands 150,000 guilders from the Bishop of Speyer and threatens to destroy the castle. When the former is refused, he destroys not only Chestnut Castle, but also Madenburg Castle. A makeshit restoration ensues. Chestnut Castle is demoted to the seat of the episcopal forest administrator.

In the Palatinate War of Succession, French soldiers destroy the abandoned castle, which is subsequently poorly repaired.

During the French occupation, Chestnut Castle becomes the property of the French state. Many components of new buildings in the area are destroyed or removed.

As “Rheinkreis“, the Palatinate now belongs to the Kingdom of Bavaria. The castle ruins of what had often been called “Hambach Castle” since the 19th century, also become the possession of the Bavarian government.

Sixteen citizens from Neustadt win the castle ruins for 625 guilders at an auction from the Bavarian state. Despite the ensuing responsibility to secure the fortress, that same year, the stones of Michael’s Chapel were removed.

A committee of citizens from Kaiserslautern win Hambach Castle at an auction and bequeath it to the Bavarian Crown Prince Maximilian as a gift from the Palatinate people on his marriage to Princess Marie of Prussia. The people now start referring to the castle as „Maxburg“ (Max Castle).

According to plans of the Munich-based architect August Voit, Max Castle is to be redeveloped to become a summer residence. The stylistic model is Hohenschwangau Castle, which was also remodeled under Crown Prince Maximilian in neo-Gothic style. The dwindling interest of the Crown Prince leads to the halt of construction work. 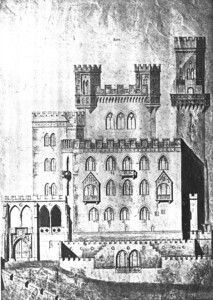 The district of Neustadt an der Weinstraße acquires the castle ruins and its surroundings from the Wittelsbacher Ausgleichsfonds (Wittelsbach Equalization Fund). The castle ruins are overgrown with plants and trees. Extensive clean-up efforts get underway, including the removal of meter-high piles of rubble.

The great hall is covered, and windows and a heating system are installed to allow for events to be held regardless of the weather. Since the administrative reform in 1969, the district of Bad Dürkheim is the owner of Hambach Castle.

To celebrate the 150th anniversary of the Hambach Festival, extensive restoration and construction efforts get underway. The goal is for Hambach Castle to be both a place to hold meetings and a place of documentation. On the interior, mainly wood and wrought iron are used. On the newly created third floor, the first-ever permanent exhibit about the events of the Hambach Festival opens to visitors.

Hambach Castle is to become a modern event and exhibit venue. For the renovation, remodeling, and modernization, a design competition is held, which Max Dudler wins. The following construction projects are implemented by Max Dudler and financed by the state of Rhineland-Palatinate.

Barrier-free access to Hambach Castle featuring, among other things, a newly installed elevator.

The rooms of the castle undergo extensive updating. The historicizing wooden ceiling of the banquet hall is replaced by a jet-black ceiling where the event technology and the building’s climate control technology are stored. 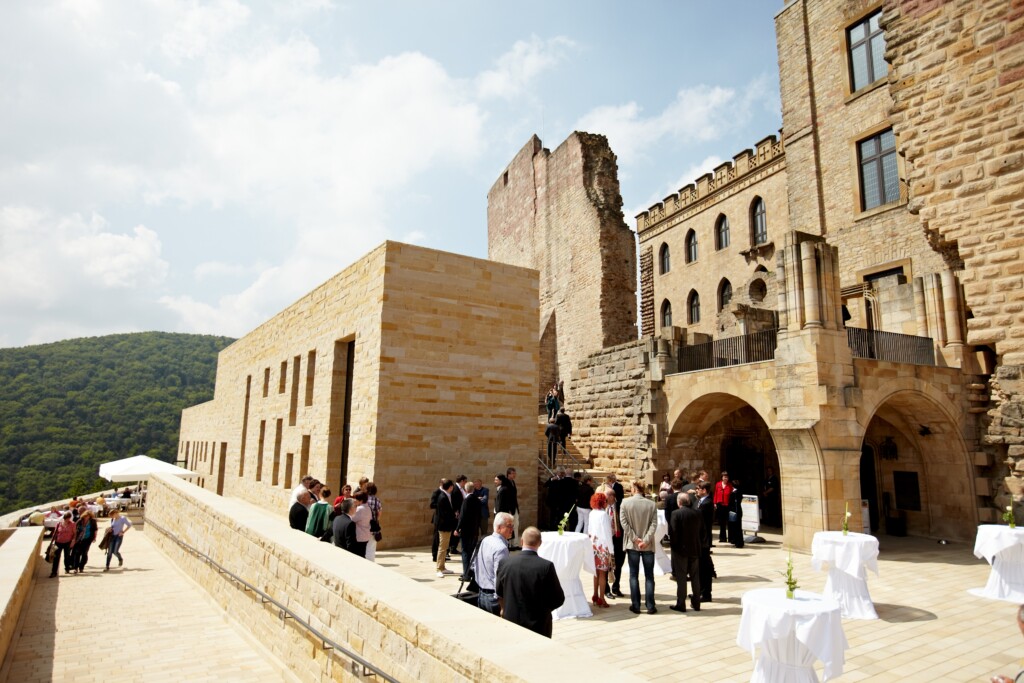 The Visitor Services Center (Visitor Information and Ticket and Museum Shop) is opened. 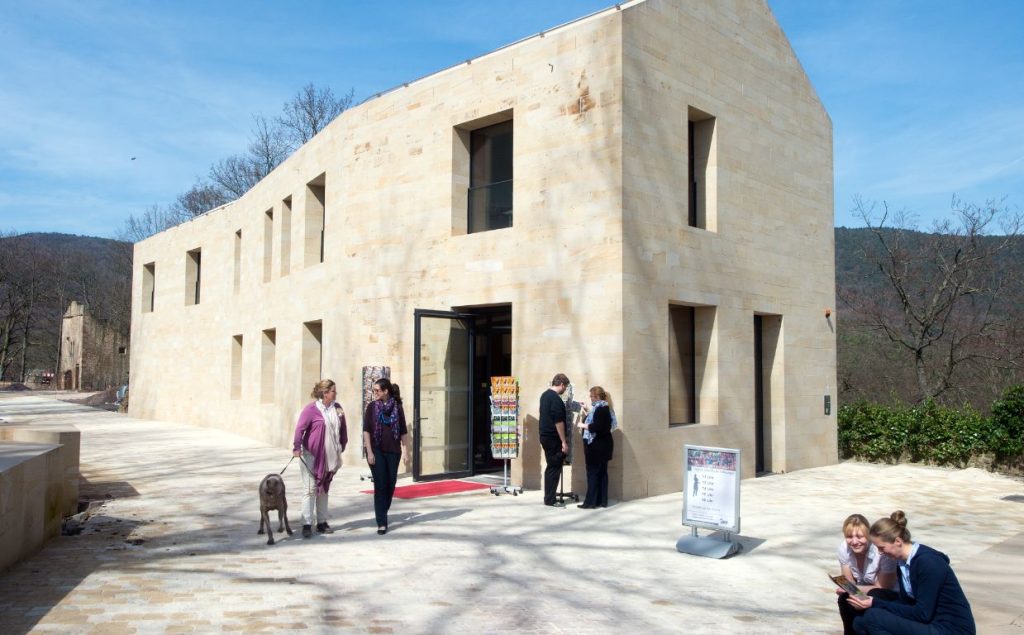 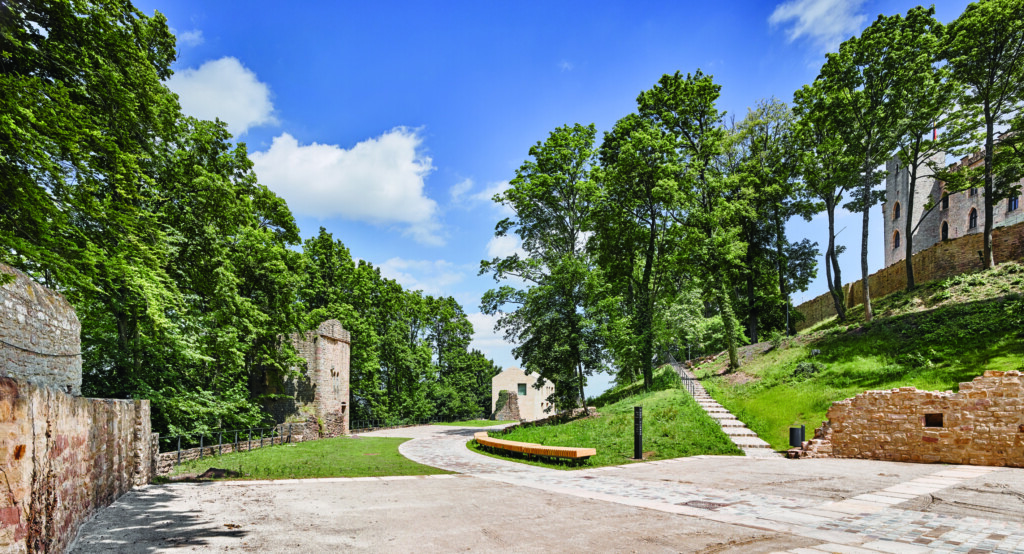 More infrastructure projects, such as the barrier-free bus stop with an adjacent parking lot, new pedestrian foot bridge, and upgrade of the roadway up to the castle, are completed.